Argentine tango was developed in the late 19th century in Montevideo and Buenos Aires, two rising harbourtowns at both sides of the Rio de la Plata in South-America. Mediterranian immigrants from Italy, Spain, jews from Germany and Russia, blacks from Africa were stacked in conventillos, huge buildings with poor housings around patios where they met each other. It is at those patios where the tango was born. Exchanging songs, memories, complaints and hopes the tango became the new expression of a new generation. Nostalgia, longing for lost ones and melancholic stories made tango the blues of Latin America. We still can hear Spanish flamenco guitar rhythms, Napolitan Belcanto singing and African percussion. The Bandoneon was added by Germans and soon would become the instrumental voice of Tango. The tangodance that was developed along with the music is an intimate couple-dance between a man (the leader) and a woman (the follower) and is characterized as an embrace (abrazo). The dance gained extraordinary popularity at the turn of the century. Soon the tango took the European continent by storm. Its sensual nature inspired the pope in Rome to ban it around 1910 which only contributed to its rapid succes. During the 1920’s big dance-orchestras appeared on the scene, and singer Carlos Gardel became the first tango superstar. The 1940’s are described in tango-history as the Golden Years. World War II paralyzed the entire planet, but Argentine economy flourished, exporting steel and wapons to the higest bidder. In those years the famous orchestras of Juan d’Arienzo, Carlos di Sarli and Haníbal Troilo mesmerized Buenos Aires city-life where open air parties with thousand dancers became quiet common. During the 1950’s the popularity of tango decreased due to the spreading of North American culture (jazz, pop, rockmusic). Only Astor Piazzolla would be recognized as the great inventor of a new tango-style, the jazzy nuevo tango in the sixties. In the 1970’s discomusic and fashion took over, but in the mid 80’s a renewed interest inspired young performers and musicians to rediscover the authentic Argentine Tango. 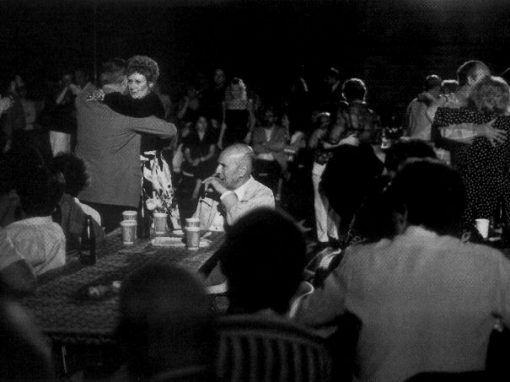 In 1986 Tangoschool Amsterdam was the first school in Holland specialized in tango-dancing and started organizing the first milonga’s and tango parties in the legendary Roxy disco in Amsterdam. They invited famous tango teachers from Argentina, such as the legendary Antonio Todaro and Pepito Avellaneda for workshops. Soon tango gained tremendous popularity throughout the Netherlands and nowadays almost every city has its own tangoschool and milonga’s. The past years introductions of new styles and genres have been mixed with a more traditional approach. Gotan Project, Narcotango and Bajofondo from Buenos Aires present tango-music with electronical instrument and loungey dub grooves, some with live performing DJ’s. Other DJ’s have started to mix Piazzolla on their dance-tracks, while a growing number of classical composers and musicians adopt compositions, samples and arrangements in their current practice. 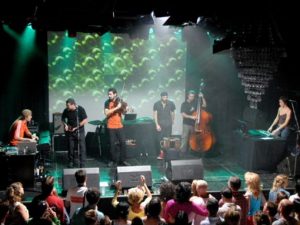 Concert Bajofondo, Melkweg Amsterdam, June 2006 This development has intensely affected the tango-scene in Buenos Aires. Only twenty years ago tango was performed and danced purely by aging porteños in half empty dance-halls, nowadays a new generation of tango afficionados has embraced the tango. It is an old and new, a traditional and hip way to spend some time in someones arms in some ancient or underground venue.